Apologies in advance: this post is more scattered than normal as there is no story here, just passion and feeling. And some pictures.

I’ve said it before and I’ll say it again: 3D printers can, more easily than almost any other tool out there, turn dreams into reality. The barriers to the physical manifestation of almost any idea have been greatly reduced, and there is no reason that every thing one can envision shouldn’t be 3D printed, regardless of how silly it may seem.

Why I keep espousing this idea is that I learn by doing, and 3D printing is no different. The more I 3D print, the more I learn about design, materials, crafting, honing skills, other people’s opinions, and what positively affects people.

Pushing the bounds of “normal” when it comes to the ideas I choose to design does two things:

I’ve been documenting my “mainstream” ideas here on this blog, but after seeing Makerbot’s blog post about my “pretty thing”, realized that I should a couple of the “crazy” things I’ve been thinking about as well, and talk about how and why they came to be. What’s really fun about both of these is that they were born from very simple statements from friends and family.

The first “thing” stemmed from a friend and co-worker walking into our team room one day and said “you should make handles that go on the side of our laptops to turn them into tea trays”. Indeed!

The thought was that we have a lot of old, used MacBook Pros at work, and there are probably a fair number of people who have old ones at home too. Why not turn something that is just sitting in a drawer/closet/basement into something useful? Being British, my friend went to tea trays as a first option. But really, it was a simple idea and both hilarious and cool.

I spent some time thinking about how to design it before I opened up SketchUp. But once I got going, I had my first design. 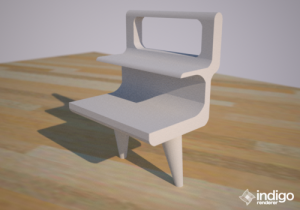 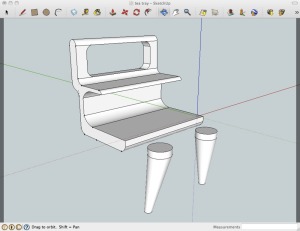 This was very utilitarian in feel; it served it’s purpose and was easily printable with its three parts. But it was boring. And it was going to take a really long time to print, more time (and plastic) than I was willing to give it.

So I went back to SketchUp with the thoughts of a) use less plastic, and b) make it take less time to print.

It wasn’t until I was spinning the finished thing around in SketchUp that I realized that it looked like a robot doing the yoga “chair” pose. It was suddenly “cute” and had personality. I showed my wife and she agreed; a good sign.

I started printing a set of pieces one weekend and had to stop mid-way through the back piece. I had enough to test one side of the design on a laptop and that would do for the time being. I showed it to quite a few people and got great responses – laughter, curious looks, and a lot of “oh, what if _____” and “could you print _____” questions.

I’ve yet to print the entire set, but will do so in time. I’ll post pictures.

You’ve Got Some Taco on Your Finger

Here in Austin, breakfast tacos are a way of life. Really, tacos any time of day are necessity, but breakfast tacos are something special. At least once a week I’ll walk to Whole Foods and get some for my wife and I. WF makes rather large, rather messy breakfast tacos. We always end up with beans or salsa or cheese on our fingers.

Last week, during a discussion with my wife about “taco finger” as we call it, I hit upon the idea of a prosthetic piece for our hands that would hold the tacos and leave our fingers free. I immediately thought of a “taco claw” similar to the grippers on early version prosthetic hands for folks who lost their own. But how would it go on our hands? I wanted it to be self-contained; no straps or other parts necessary. Ah-ha! A ring you wear on your finger that has the claw attached. Yes!

Later that evening I had the first version of the “taco claw ring” designed and ready to print. This upcoming weekend will be the test run.

Again, when I’ve talked to people about this taco claw ring, eyes light up, followed by uproarious laughter, followed by “that’s a great idea – you should make _____ too!”

I really enjoy seeing people dream, and knowing that it won’t be long before they, too, will be 3D printing stuff in their home, trying new ideas, and making their friends smile. And dream.

Dictionary: Surrealism, n. Pure psychic automatism, by which one proposes to express, either verbally, in writing, or by any other manner, the real functioning of thought. Dictation of thought in the absence of all control exercised by reason, outside of all aesthetic and moral preoccupation.

Encyclopedia: Surrealism. Philosophy. Surrealism is based on the belief in the superior reality of certain forms of previously neglected associations, in the omnipotence of dream, in the disinterested play of thought. It tends to ruin once and for all other psychic mechanisms and to substitute itself for them in solving all the principal problems of life.