When I was 10, my parents sent me to stay with my grandparents in Pennsylvania for a summer. My grandparents, apparently not knowing what to do with a 10-year-old boy, enrolled me in summer school. Yeah, total bummer.

There was a week or so before school started so they took me to a toy store to get me something to pass the time with. I picked the Tomy Little Van Goes toy — basically a bunch of interchangeable plastic plates and a holder that you put paper over and rubbed to get the outline of different vans you could then color. I thought this was great, until three days later when I got bored with it because there weren’t enough of the kinds of pieces I wanted to see.

As I’ve been thinking a lot about crafty things for groups lately, I recalled my initial joy of this childhood toy, and the frustration at not having all the things I wanted it to. Then I remembered that I have a 3D printer! What a great thing to be able to design and print!

Instead of trying to find a vintage toy online and make new pieces for it, I decided that I really should just make my own complete kit — my design, my plates, and no worry about stepping on any company’s toes.

I pulled up SketchUp and started to design the pieces. Rapidly things came together and I had a decent selection of parts to make things with. While I was going to start with vehicle parts, I instead started going down a different path; two actually.

First was face parts. Since three plates would fit in my holder, this was perfect for eyes, nose, mouth. Of course I didn’t want just human features, so I whipped up robot parts, rabbit parts, cat parts, and plain old human parts.

Second I thought it would be cool to do a set of ABC plates. While three plates is limiting for making words, it’s perfect for initials — like the old video game high score style. So I made A/apple, B/bats, C/cat. I leave it to the reader/maker to create D/dinosaur, E/eel, etc. 🙂 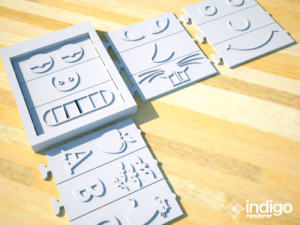 I tweeted a screen cap and got very positive responses and a direct messages from designer friend who was excited because she recalled the girl version of the 80’s toy — Fashion Plates — and wanted to get in on the modern fun. I said “sure” and she got to work.

This past weekend I took to the studio and started printing.

The base piece was the largest item I’ve printed to-date, and certainly the longest I’ve spent on a single piece printing, an hour and half. It was worth it. This is the first piece that has felt like a real “thing”. That is, while all my other pieces have printed beautifully and felt great, they didn’t have the mental feel that they were “big”. It’s a weird thing to try to describe, but I look at the base and hold it in my hand and it feels like a real product.

The plates themselves were taking around 15 minutes each to print. I printed an eyes/nose/mouth set and tried it out. The results were okay, but not as good as I had hoped for. (Later, I showed my wife and she remembered that she had Fashion Plates too, and that the quality I got from my first set of plates was about the same as she recalled from Fashion Plates; that is, not very good). I changed the height of the image relief from 1mm to 1.6mm and re-printed another eyes/nose/mouth set. These worked much better.

I also printed a little cover plate to help hold the paper down. Sadly my pegs in the base were a little wider than the depressions in the cover so it doesn’t lock into place. I’ll re-print the cover as it was a 20 minute print, rather than change the base and spend another hour and a half.

There is one piece that I totally didn’t think about when I was designing the whole kit — a crayon holder! While I was printing the cover plate I designed and exported a holder for the crayon and printed that as well.

Everything came together surprisingly well — all the plates fit in the holder as expected, the cover helped hold the paper steady (though it’s really not needed), the relief came out really well. 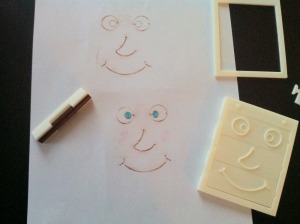 I can’t wait to print more of the plates, as well as get the designs from my designer friend Erin (I’m sure they’ll be fabulous and sassy).

What I’m really excited about is that folks can not just download the kit and print it themselves, then they can design and make their own plates! Face parts from people all over the world; different animals; non-Latin characters; boat parts… The sky is the limit. If they share them on Thingiverse there could be an ever-expanding selection of plates, and kids today won’t get frustrated with the lack of options. Yay!

I’m already working out an expandable design that would allow for as many plates as you wanted and would still be printable on a Thing-o-Matic (4-inches square). I’m thinking interlocking plates, but I have to wait until I get all the current plates printed.

So, after my half-week of being bored at my grandparents, summer school started. I was shocked to learn that they had enrolled me in a photography class and an art class! Score! My grandparents did well; very well. That was one of the best summers I can remember, and now I brought a bit of that into the 21st century.

2 thoughts on “Cottage Frottage; or, making creative fun at home.”