In Part 1, I talked about the how and why of me wanting to experiment with 3D printing, and how my learnings early-on kept me looking for ways to augment my surroundings — even outside the home.

One thing I didn’t mention — and bears some impact on how to read this series of posts — is that while I work for a design and innovation firm, I’m not an industrial designer and have no previous experience in industrial design (ID). I’m a technologist with a background in music, visual design, and print media. I’ve never taken any ID classes nor worked on any ID projects. But I’ve dabbled in 3D modeling for many, many years and generally have an eye for good design. This whole “design and print something I can hold” is as new to me as the ability for regular folks to own a 3D printer.

My thoughts come from this perspective — fresh, inexperienced, and full of newfound wonder. I’d also say there’s a fair amount of naiveté in it all as well, and I take nothing all that seriously — that’s just the way I am; it’s part of what makes me me.

One day at work while walking around the office, I found the next victim of my 3D printing experimentation: a white IKEA bookcase that we have many of (even in the restrooms, though those remain empty). I said to myself “There are two shelves in this bookcase and there are 100 holes for shelf pins. Maybe I should print some covers for those holes to make it look better.” While a nice idea, it seemed wasteful. There had to be something better to fill those holes; my interested was piqued.

I started doing informal design research at the office. Basic questions like “do you have a bookcase with adjustable shelves in it?” and “what do you put in your bookcases other than books?”. The answers were mostly what I expected, with one exception: a surprisingly large percentage of those questioned put electronic devices on their bookshelves. All of the folks who said they did this had the same problem: they didn’t have a nice way to keep the cables organized as they ran up or down and out of the bookcase.

This was it – my next project! I was going to design and print a cable holder that fits in the holes in the bookshelf. It was a perfect match for what I was doing — simple and mundane.

I started researching, measuring, sketching, modeling, re-modeling, starting over, rinsing, repeating. I started with a single plug with a loop, advancing to a sculptural piece that utilized two plugs vertically. I created and tweaked models in my free software tools of choice — Google SketchUp, but quickly transitioning to Blender to get the curves just right. I had the model where I wanted it. It was smooth, stylish, and could almost be called “sexy” (for shelf pins, at least). 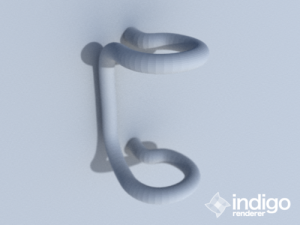 I ran the model through the 3D printer’s software — ReplicatorG — letting it do it’s thing with slicing, dicing, and adding necessary support structures to create a print-ready object. This was going to be an awesome print, even with the enormous amount of support and requisite manual clean-up.

Despite the object being perfect, something just didn’t feel right; my brain said “this is it” but my instinct said “not yet”. And so I sat on the object for several weeks, designing and printing other items, traveling a lot for work, and just doing the normal day-to-day stuff. It wasn’t until I sat down one evening browsing Netflix for something to occupy a dull evening that I saw the documentary Objectified was available for streaming, so I started watching it and the issue I had with my model became apparent. Part-way through, one of the designers being interviewed said something that every designer is taught or learns at some point, but something that is all-to-easily forgotten: being clever for clever’s sake is not good design. My design was, in fact, too clever. It was shaped by a desire to have a beautiful (pretty) design rather than a useful (good) design.

So throwing the old model out the window, I fired up SketchUp and in 15 minutes had a new model — one that was simple, functional, and still a bit sexy (a nice mix of curves and right-angles). It wasn’t too big, it seemed the right size, and now I saw that it could accommodate multiple uses. More useful, in fact, than the original design since as a single pin, it could rotate and direct the cables through the bookcase instead of being only vertical due to the first version using two holes. What happened next is where a lightbulb started illuminating in my head, and one that led to the realization of what this object actually was. 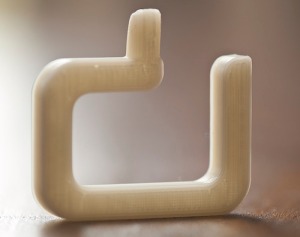 Something in the new design spoke to me of being able to not just hold shelves and cables but it was, instead, the foundation of a larger design system. I quickly realized that I could easily make modular pieces that attach to this one (something not easily done with all the curves of the first one): a drop-in battery-powered LED array to light up the shelves, a small vase to hold a flower (if VW could put one in their Bug, why not here?), a pen holder. I went back to the office and started talking to more people, explaining the idea and this time asking a different set of questions.

The discussions that followed and the answers to my questions delighted me. I got several folks who asked for my original idea of basic hole covers (there is something to that!), a slide-in picture or note holder, lighting, a small shelf to hold small items, fun ornamentation, and so on. From useful with a purpose, to fanciful and playful. While all of these things were completely do-able within the constraints of my 3D printer, it wasn’t the objects so much that made me happy. Instead, it was that here were a bunch of different people able to quickly come up with ideas around an object that turned unexplored and overlooked space into useful and fun space.

I got to work creating an object that would plug into my shelf pin/cable holder, allowing other items to be printed making use of this base. I printed a small shelf for small items, designed the electronics for LED lighting, and as I printed more base pins started trying to learn about ways to make the base stronger or more flexible. This was fun and exciting and turning into something more than I started with. 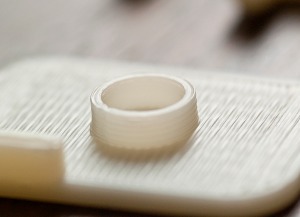 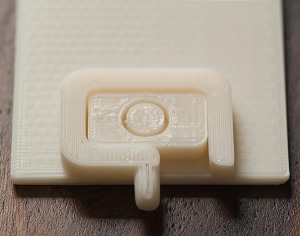 I know that sounds strange (aren’t I just saying the same thing?), but bear with me here. Where I was mistaken was that I was trying to answer the killer app question by looking at the physical “things” that these printers produce and draw a relationship to existing tools that people use. For instance, I know what I can make with a circular saw or a router I can walk into any hardware store and buy. I think most people do to, and if they don’t there are many books and resources nearby to tell them what they can do with them. (That level of knowledge doesn’t yet exist for 3D printers)

Now, however, I’ve seen that the process that led me to create an object that sparked people’s interest and excitement was way more “killer” than any actual object. So I’m going to make a bold (perhaps obvious) statement here: the killer app for in-home 3D printing isn’t that Joe/Jane Public will be able to print something on-demand, but rather that he/she has a tool that enables the rapid iteration of ideas, taking those ideas beyond just another “thing”, and turning those ideas into real innovation.

The process of being able to design, print, learn, iterate, and change the world is what I’m calling “desktop innovation” (a relation to desktop publishing).

This isn’t a new concept; I’m sure the same thing has happened when other tools (again, circular saws and routers) became available on a mass scale. The craftsmanship that was once limited to a group of people with specialized tools was opened to a larger audience and their ideas. This didn’t diminish the value of craftsmanship, but rather gave the masses inspiration, ideas, and something to aspire to, creating their own methods and processes on their journey. At least, that’s the way I’m taking this.

In Part 3 I’ll expand on this thought, talk about the flaws, pull back on the hyperbole, and share some files.